The black rhinos journey back to Zinave National Park, Mozambique

Seven critically endangered black rhinos and twenty white rhinos have been successfully translocated from Manketti Game Reserve in South Africa to Zinave National Park in Mozambique. With this reintroduction, the black rhino has returned to Southern Mozambique which disappeared from the region 40 years ago. 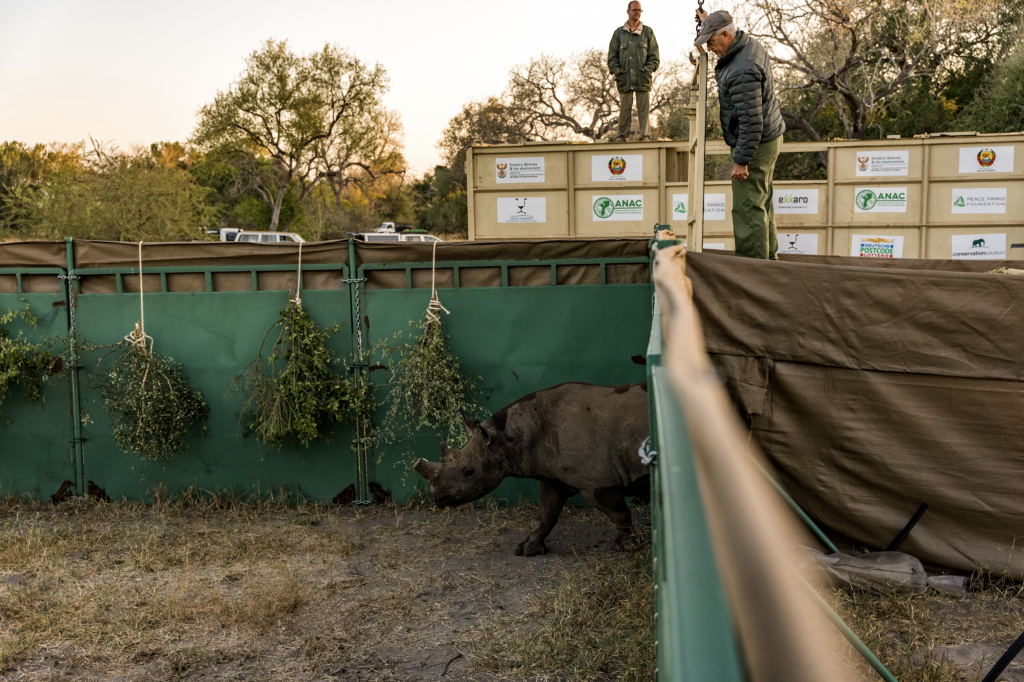 One of the black rhinos, fitted with a RhinoEdge Puck 34mm tracker, let out into its boma before being released into Zinave National Park. – photo credits: Peace Parks Foundation.

Rhino are vital keystone species performing distinct and irreplaceable roles within ecosystems. Together with the 7 black rhinos, 20 white rhinos have been translocated to Zinave National Park. The white rhino is classified on the IUCN red-list as Near Threatened, but their populations remain at high risk due to poaching. Rhino poaching has risen to levels not seen in almost two decades. Although there is no scientific proof for its medical value, demand for rhino horn remains high. It is used in traditional Asian medicine, where it is ground into fine powder as treatment for a variety of illnesses such from cancer to nosebleeds. However, rhino horn is nothing more than keratin, calcium, and melanin – there are no proven health benefits for humans.

Beyond its extinction in Mozambique, the black rhino suffered a radical decline across its entire native range: between 1960 and present day their numbers, scattered sparsely from Kenya down to South Africa, dropped by 98% to less than 6,000 individuals. Present rhino populations are small and threatened by rising onslaught of poaching. To protect the rhino, their reintroduction to new suitable habitats, with capacity to rebuild large viable breeding herds under strong security and strategic conservation management, is one of the many measures currently undertaken.

Developing a high performance rhino tracker has been at the core of Smart Parks R&D from the start. We have been iterating over different versions and methods for over 5 years. One of the big lessons learned was that a 50mm diameter is drilled into the horn. This meant we could increase the size of the tracker to the size of the hole, allowing us to add more batteries, using an internal LoRaWAN antenna and more importantly, increasing the GPS antenna performance. As some horns are not big enough to drill a 50 mm hole, we developed an intermediate size. 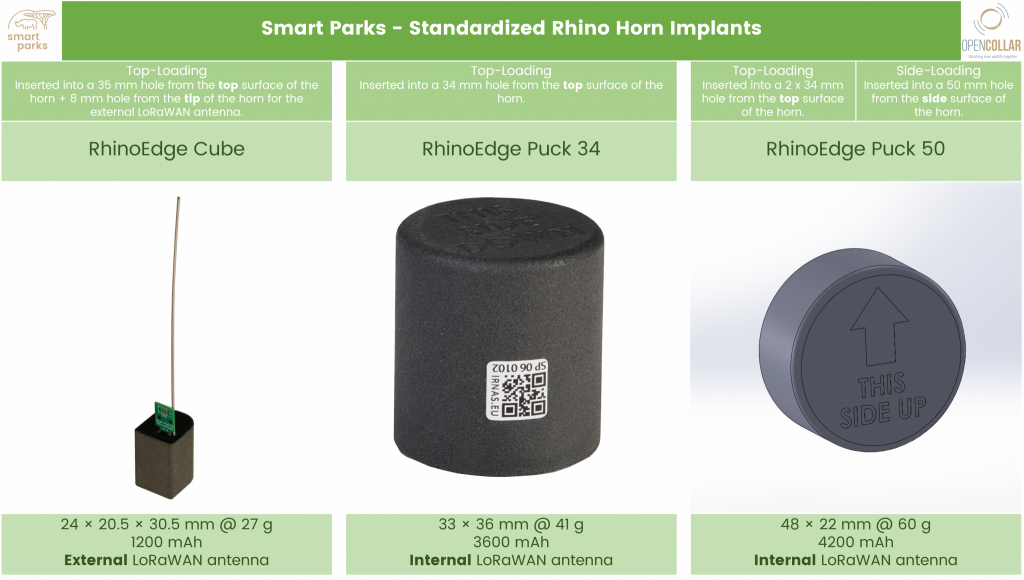 Another proven concept was the top-loading method (see left picture below), where the device is loaded into the inside curve of the horn – in addition to the side-loading method where the device is loaded from the side. While testing GPS performance on real rhino horn in Hluhluwe–iMfolozi Park, it was discovered that rhino horn blocks the GPS signal significantly. Using the top-loading method and the same filament (Vettec Adhere – see picture below), a more suitable condition is created that improves GPS signal reception and the GPS performance is significantly increased. 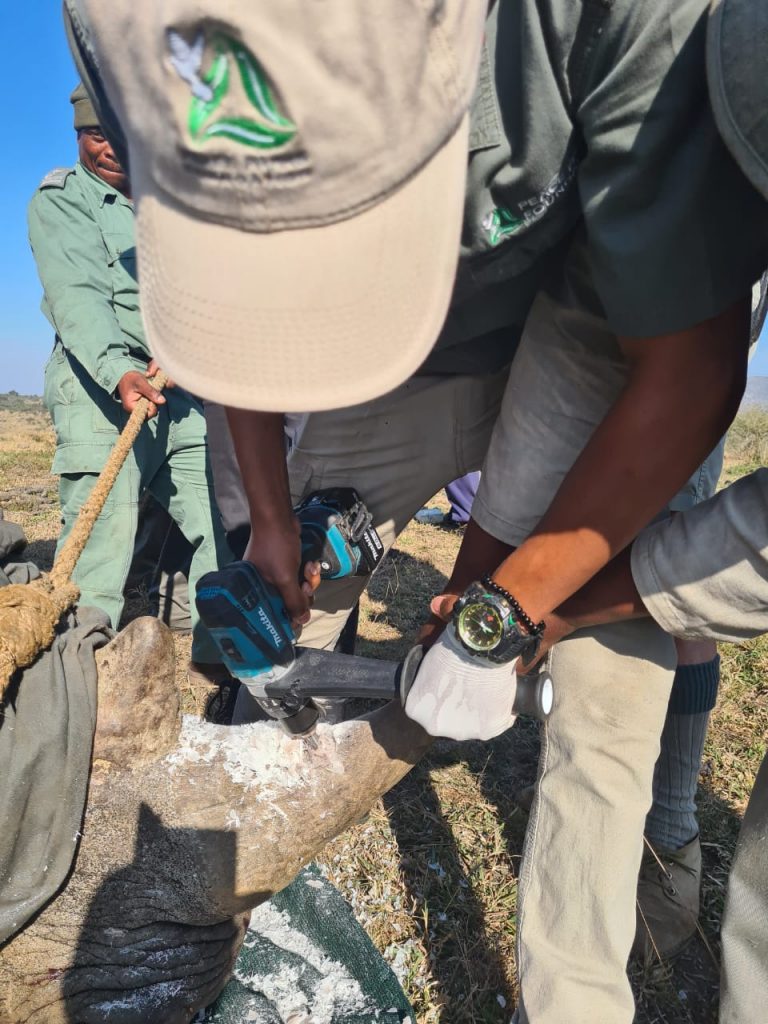 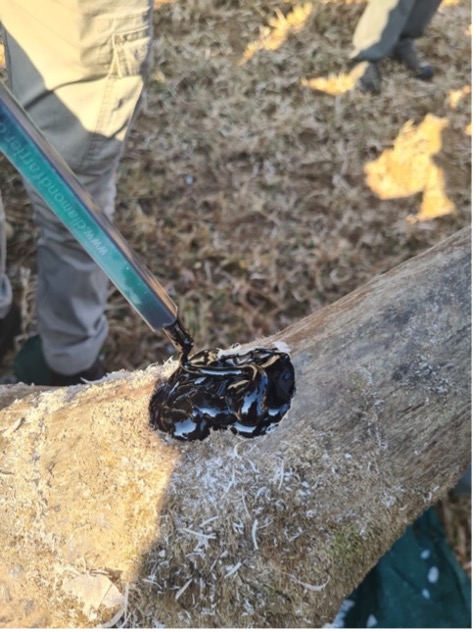 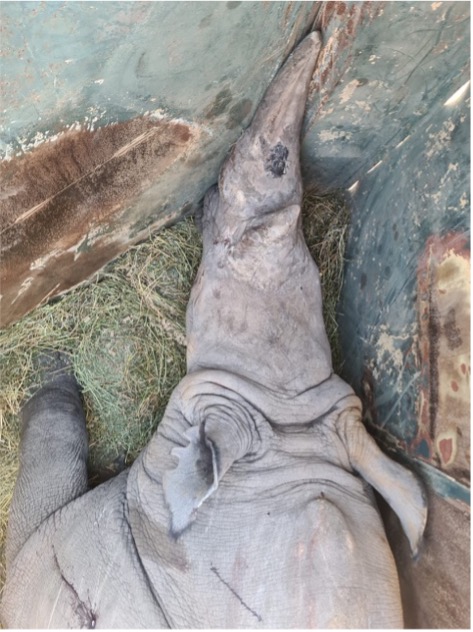 The development of RhinoEdge is supported by the Peace Parks Foundation and Suzuki Rhino Club. We are looking for additional funding to continue its evolution.