In 2014, Smartparks provided aerial video and imagery support for a National Geographic Orangutan Rescue documentary Back to the wild. Currently, ShadowView is collaborating with International Animal Rescue to guarantee long-term aerial tracking of orangutans to protect and monitor them after their rehabilitation release. 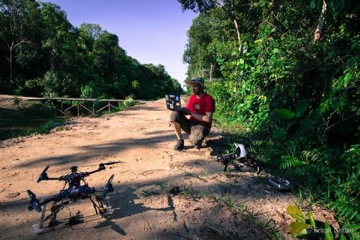 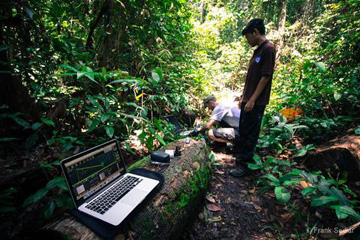 Earlier this year, Dirk Gorissen, a longtime supporter and advisor of the Smartparks, Foundation, completed a successful trial with the proposed technology.

The objective was to aerially monitor the tracking chips which IAR vets subcutaneously inserted in orangutan’s necks, when first released back into the wild.

The established orangutan tracking method is extremely labour-intensive, with trackers needed to locate the animals by foot, while using hand-held aerials and receivers. GPS devices are often inefficient due to their dense canopy cover, their size which is too large for subcutaneous purposes, or their batteries which have unsufficient battery life for long-term use. We therefore recognised that a new method was needed to cost-effectively track more animals over larger areas.

After a great deal of testing Dirk built a system that worked in the field. The success of our technology solution has been proven and has led to the development of fully operational UAS (Unmanned Aerial System) to cover large areas and locate more orangutans.

Aerial drone tracking is never going to replace the need for rangers and volunteers on the ground. This technology does allow them to work more effectively and enables them to protect more critically endangered animals.

Stage 1. Field testing and proof of concept. Funded and completed.

I want to support this project