– We have successfully inserted LoRaWAN non-GPS rhino horn implants in 2017
– We installed the first LoRaWAN network in Africa in 2016 and we have upgraded to a geolocation network in 2017
– Mkomazi National Park is our primary solution development and testing area
– Covering +2.000 km2, including +20 black rhinos inside the fenced rhino sanctuary
– Highest tower location is situated at +1.300 meters above sea level
​- System has 0% downtime since first installation
– Collecting over 35.000 location updates per day

The Internet of Life and the ShadowView Foundation have successfully implanted LoRaWAN™ -equipped sensors directly into the horns of critically endangered black rhinos. The sensors give park rangers the ability to accurately monitor the whereabouts and activities of the large mammals and keep them safe from poachers. 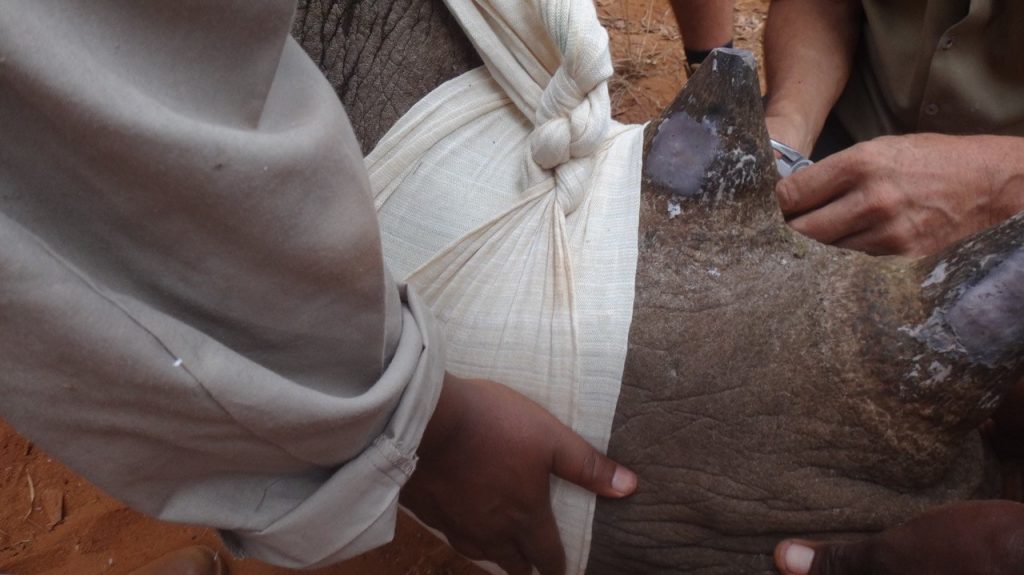 The operation took place in Tanzania and is part of a LoRaWAN™ IoT Smart Parks solution that is rolled out in several National Parks throughout Africa. The rhino-trackers show the location of the animals within the sanctuary, providing the park’s security personnel with better actionable intelligence. The deployment in Tanzania was supported by Semtech and Kerlink.

Using the LoRaWAN™ network’s cost-effective, energy-efficient and long-distance connectivity (up to 30 kms), powered by Kerlink , small sensors were directly implanted in the horns the rhinos. Kerlink’s geolocation-ready LoRaWAN™ gateways combined with Semtech’s geolocation solver eliminate the need for GPS systems in use in some IoT applications that consume far more energy.

“The brutal onslaught of poaching of rhino populations across Africa has resulted in fewer than 5,000 black rhinos remaining in the wild”, explains project leader Tim van Dam, “1,000 of which are the Eastern black rhino subspecies. Smart Parks is a new tool in the war against poaching.”

As a next step, ShadowView and The Internet of Life acquired the support of the World Wide Fund for Nature (WWF) to increase network coverage of the protected area, so that all black rhinos in the area can be protected with Smart Parks.
​
Other Smart Park applications used by the park management are the monitoring of gate open/closures through solar-powered LoRaWAN™ -based sensors installed on the gates and solar powered trackers installed on vehicles to track the whereabouts of personnel and tourists in high-risk areas. ShadowView and The Internet of Life will continue their efforts to improve the Smart Parks solution in several National Parks. New applications, like improved fence monitoring, connected camera-traps and tracking of equipment, like firearms, will be launched in the near future.

Internet of Things system to protect rhinos in Tanzania

April 2016, Tanzania – In April a small team of engineers from the Netherlands managed to complete the installation of a new communication and observation system in Mkomazi National Park. Mkomazi is one of the 14 official National Parks in Tanzania. Mkomazi is a vital refuge for two highly endangered species, the charismatic black rhino and sociable African wild dog, both of which were successfully reintroduced in the 1990s. The black rhinos are protected by a fenced area called the Mkomazi Rhino Sanctuary. To keep the rhinos safe from poachers, the park management encourages and supports the development of new tools. 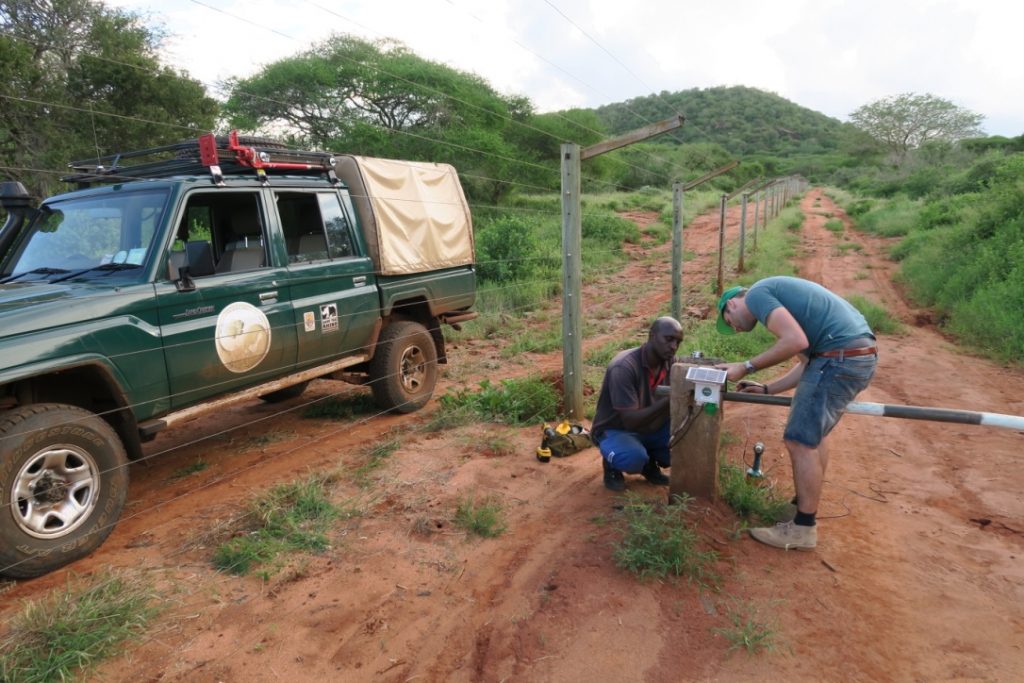 The new Smart Parks system has two main goals. First goal is to increase security of the Rhinos and the people inside the Sanctuary. Second goal is to improve park operations. Both goals are reached by the gathering of sensor data across the park and present them on a screen in the main observation room. Since Mkomazi has no basic 3G or 4G internet coverage, the engineers have installed a new wireless telecommunications system called LoRa®. The special thing about LoRa® is that the signal is almost unable to be detected by poachers, it runs on solar energy and at the same time is able to provide coverage for all sensors in the Sanctuary. During the expedition the team installed differed sensors. All sensors are very small and run on a little solar panel. The first sensor that was installed is to see the GPS position of the Rhino trackers, the guards that stay close to the Rhinos to protect them. These GPS sensors where also installed at the cars, quads bikes and motorcycles. Semu Pallangyo (Rhino Sanctuary Manager) has a GPS sensor installed on his Suzuki motorcycle which he uses to make his daily trips across the Sanctuary. Now, he has an extra pair of eyes on him in case things go wrong. Other sensors the team installed are the gate sensors. All important gates which provide access to the Sanctuary are now fitted with sensors that detect if the gates are open or closed. Now the head of security can see the status of these gates by looking at the google maps view in the observation room. This observation room is playing an important role in securing and managing Mkomazi Rhino Sanctuary because all information is collected here and used to plan and direct operations of all personnel and resources. This is called Situational Awareness and is very important in modern wild life conservation. 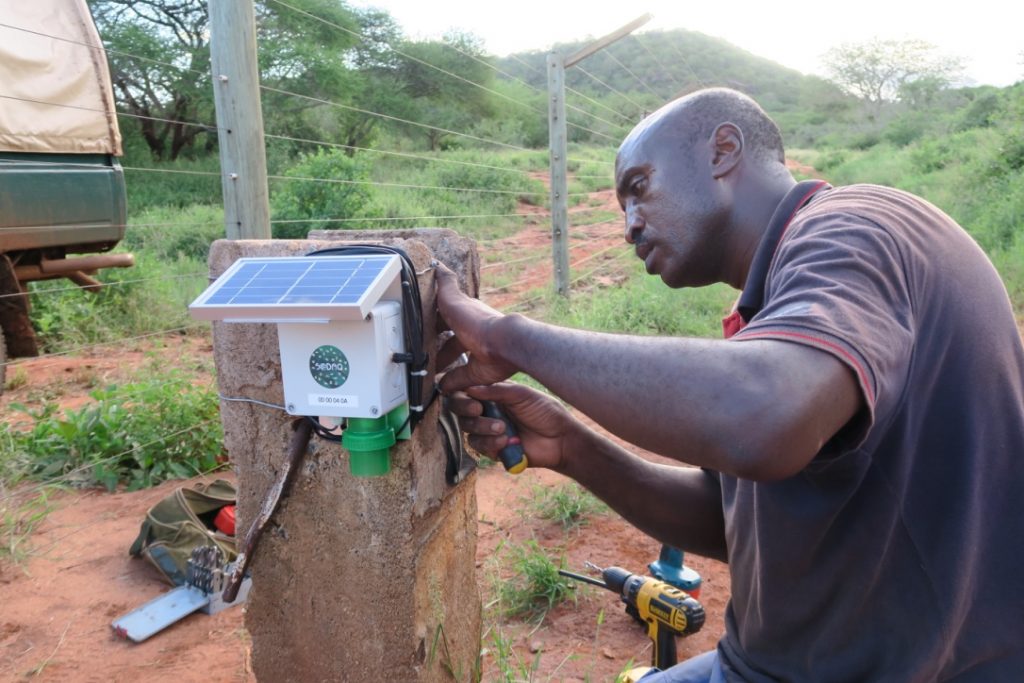 Next expedition the team is planning to install a very special sensor: the Rhino sensor. Being able to install a sensor in the horn of a rhino means the security can be improved by a giant leap. Rangers can be positioned at the best position during day and night to encounter approaching poachers. This information also provides valuable data for research on rhino behavior. The team spend more than 2 years of development of this sensor and now hopes to finally get it working. Since the start of the development the team has gathered support from Sodaq, Shadowview, the Suzuki Rhino Foundation, Dare Creative and many friends and family.

With this new Smart Park system the Mkomazi Rhino Sanctuary is again one step further in winning the war against poachers. However, as wild life conservation strives forwards the poachers are not sitting still. Therefore, the team will continue to install more sensors at wild life, gates, vehicles, water and fuel tanks. In addition the team wants to improve the internet connection to Mkomazi camp by installing new antennas that can receive the 3G and 4G signal from the Tanzanian telecom providers. This is becoming more important, since the Smart Park system can be supported through the internet and Mkomazi becomes less isolated.

Please continue to support us in our war against poachers. The wild life and especially the Rhinos need this more than ever.

Thanks to Smart Parks technology, we have learnt a lot more about the behaviour of the individual rhinos. We now have much more advanced information in realtime on a screen which gives these beleaguered animals a much better chance of survival from outside interference. I have been working in the wildlife world in East Africa for 50 years now and this new technology, had it been available years ago, would have made life so much easier for everyone, including the rhinos.